Olafur Eliasson: Sometimes the river is the bridge 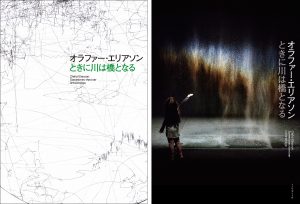 The official publication accompanying the exhibition “Olafur Eliasson: Sometimes the river is the bridge” presents works that will world premiere at the Museum of Modern Art Tokyo, Japan.

Featuring new works by Olafur Eliasson alongside works that represent his career to date, this brand new catalogue circles around key themes in Eliasson's artistic practice – including ice, water, and light – and gives insight into his interventions in public space, while exploring the artist's focus on sustainability. In text and images, the publication investigates these concepts and presents them as a ‘proposal for ecological awareness and sustainable practice’.


With its focus on 'ecology and sustainability', Sometimes the river is the bridge presents Olafur Eliasson's reflections on how we act, live, and rebuild our relationship with the world in these times of disconnection and unpredictability.
An ally in raising awareness for these issues, the catalogue features images of works that invite viewers to reflect on their perceptual experience and reconsider the underlying frameworks of their thinking. It also presents an in-depth essay by curator Yuko Hasegawa, interviews with members of Studio Olafur Eliasson about the studio's sustainability agenda, and conversations between Eliasson and philospher Timothy Morton (in print for the first time).

*The jacket of this book is reversible with Olafur Elliason’s masterpiece Beauty on one side, and his new work Memories from the critical zone on the other.


───────
Official exhibition catalogue of Olafur Eliasson: Sometimes the river is the bridge, Museum of Contemporary Art Tokyo
For further information and updates about the exhibition, please check the museum’s official website:
https://www.mot-art-museum.jp/en/exhibitions/olafur-eliasson/

［Cited from the official website of the Museum of Contemporary Art Tokyo］
Since the early 1990s, Eliasson (b. 1967) has built up a wide-ranging artistic practice that spans the fields of photography, sculpture, drawing, installation, design, and architecture. Sometimes the river is the bridge features a representative selection of his works, many of which have never been seen before in Japan. This includes early and recent installations that use natural materials; sculptures that reflect Eliasson’s long-held interest in light and geometry; photographic series; drawings and watercolours; and documentation of several of the artist’s interventions in public space.

As a child Eliasson spent a considerable amount of time in Iceland, which led to his ongoing project of documenting the landscapes and natural phenomena there. His photographic work “The glacier melt series 1999/2019” (2019) makes tangible the shrinking of Iceland’s glaciers over the last 20 years.

Influenced by our complex relationship to nature, Eliasson’s installations often use natural phenomena – such as light, water and mist – to heighten our understanding of the way we perceive and co-produce the world around us. At MOT, visitors are invited to view the artist’s earliest work in the exhibition, “Beauty” (1993), where a rainbow emerges in a darkened space. A major installations created specifically for the exhibition will utilize the cavernous space of MOT’s atrium.
The activities of Studio Olafur Eliasson (SOE) are not limited to the production of artworks. Ideas and projects are developed through daily experimentation, collaboration and research. Sometimes the river is the bridge will integrate some of this process into the exhibition through a display of the studio’s recent research into new sustainable and biodegradable materials as well as recycling techniques.

[Plates]
Sometimes the river is the bridge

[Essays]
I walked into the future and was welcomed:
Olafur Eliasson and Timothy Morton in conversation

Olafur Eliasson, the artist who listens to the future:
Art as the practice of ecology
Yuko Hasegawa

Olafur Eliasson was born in 1967 in Copenhagen, Denmark, and is currently based in Berlin and Copenhagen. After a childhood spent in Iceland and Denmark, Eliasson studied at the Royal Danish Academy of Fine Arts from 1989 until 1995. In 1995, he moved to Berlin and founded Studio Olafur Eliasson, which consists of a large team, including craftspeople, architects, researchers, cooks, and art historians. In 2014, Eliasson and architect Sebastian Behmann founded Studio Other Spaces, an office for art and architecture.

Eliasson often uses natural phenomena and is internationally renowned for works like “The weather project” (2003), installed in the Turbine Hall at Tate Modern, London, or his public art project “The New York City Waterfalls” (2008), for which he installed four artificial waterfalls along the East River and on Governors Island, New York, US.

In recent years, Eliasson has increased his efforts to advance sustainable development. In 2012, Eliasson and engineer Frederik Ottesen founded the social business Little Sun to replace fossil-fuel lighting with solar energy in communities living without electricity and to raise awareness of the need to expand energy access to all. For the public installation “Ice Watch”, Eliasson and geologist Minik Rosing transported massive blocks of glacial ice from Greenland to Copenhagen (2014), Paris (2015), and London (2018) to raise awareness of climate change. Eliasson was appointed as a Goodwill Ambassador for renewable energy and climate action by the United Nations Development Programme in 2019.

Olafur Eliasson: Sometimes the river is the bridge